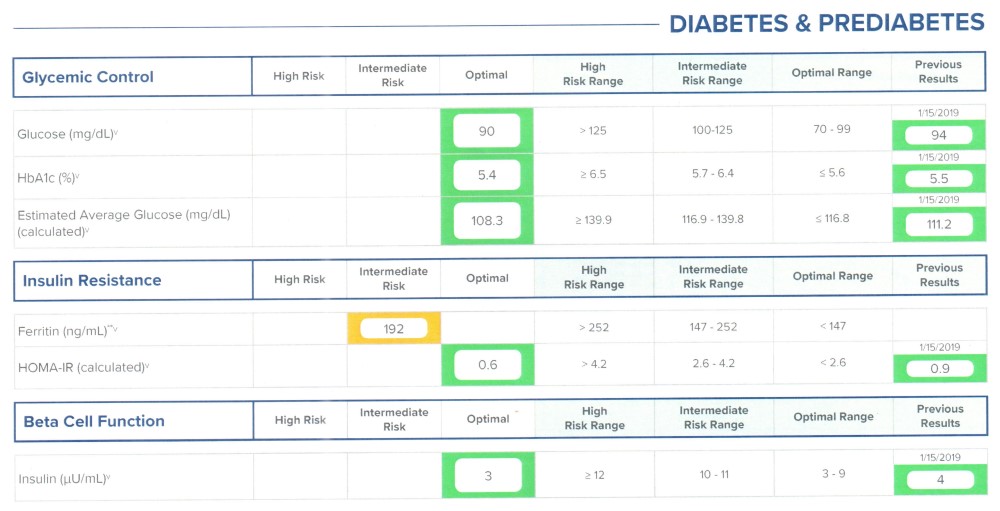 It’s been clear to me for a few years now that blood sugar regulation is important to my health, and that my blood sugar is very sensitive to the amount of carbohydrate in my diet.  The Plunge ran 2019 Jan 21 to Apr 20 and I measured my food intake religiously with Cronometer from February 6 to April 20.  During that time frame I averaged 2,243 kcal/day, and of that 277 kcal were carbohydrates; ~12% of the total; this definitely qualifies as “low carb” (LC).  According to the Mayo Clinic, “The Dietary Guidelines for Americans recommends that carbohydrates make up 45 to 65 percent of your total daily calories. So, if you get 2,000 calories a day, between 900 and 1,300 calories should be from carbohydrates.”  Of course as I have reported 70% of Americans are overweight or obese, so follow the Dietary Guidelines “should” if you will; I choose not to.

From my bloodwork all indicators are in the “green,” in fact all are in the “Optimal” category, save one, Ferritin.  So what’s that about?  I’m just learning about Ferritin, but start by having a look at the sidebar.  It seems like there is a lot left to be learned about the role of Ferritin, but the first thing I note is the use of “epidemiologic observations;” epedemiology does not establish causation, but only association; point one.  The impact of iron then is dose dependent, which is to say that there is a middle ground that is not deficiency and not toxicity; too low it’s a problem, too high it’s another set of problems.  This is a frequent refrain in biology; point two.  And finally, point three, the author’s summary, my emphasis added by underline in the side bar, “it may be in fact that the combination of obesity and iron overload is particularly prone to causing diabetes through its resulting combination of insulin deficiency and insulin resistance.”  The more I travel in the health space the more I’ve come to believe that all roads lead to a single root cause, the so-called “metabolic syndrome.”  But before I go down that rabbit hole let’s touch on a couple of the other blood test results.

Epidemiologic observations in humans and experimental studies in animal models have established a clear association between tissue iron stores and diabetes risk. A subset of these studies suggests that the relation is causal, that is, high iron is sufficient to cause diabetes. At the same time, it is clear that iron has a multiplicity of effects in many tissues that can be either pro- or anti-diabetic at the ends of the spectrum that runs from iron deficiency to iron excess. In the beta cell, for example, excess iron is toxic, but there is clearly also a minimum level required for full metallation of the proteins needed for glucose oxidation and glucose sensing. Likewise, although iron overload is associated with diabetes risk, iron deficiency is associated with another major risk factor for diabetes, obesity. The phenotypes of iron excess and obesity are certainly not mutually exclusive, however, and it may be in fact that the combination of obesity and iron overload is particularly prone to causing diabetes through its resulting combination of insulin deficiency and insulin resistance.  From the article Iron and Diabetes Risk published in the journal Cell Metabolism.

According to the wiki,

The homeostatic model assessment (HOMA) is a method used to quantify insulin resistance and beta-cell function. It was first described under the name HOMA by Matthews et al. in 1985.

It’s calculated from fast blood glucose and fasting insulin as it turns out, which means I’ll stop paying for the additional “test” and perform the calculation myself.  But I digress.

Getting Back to Metabolic Syndrome

It’s no secret that “metabolic syndrome” leads almost invariably to diabetes and/or heart disease.  As if that isn’t enough, according to an article in the journal Metabolic Syndrome and Related Disorders, “Recently, a large population-based study was done in Milan, Italy, that enrolled 16,677 subjects who were on medications for hyperlipidemia, diabetes and hypertension and followed them for up to 8 years. A total of 823 incidents of cancer occurred during the study period, including a significantly increased risk of pancreatic cancer in males and colorectal cancer in females were observed.”  For you who have decided on the course of inaction in the face of Metabolic Syndrome, you would be wise to hope for a quick end by heart attack as opposed to a slower more painful death by diabetes (preceded by the surgical removal of lower extremities, loss of eyesight, etc.) or cancer.  Pancreatic cancer is basically incurable; 20% survive a year, 7% survive 5 years.

According to the Cleveland Clinic,

You are diagnosed with metabolic syndrome if you have three or more of the following:

So with Metabolic Syndrome you hit the trifecta; heart disease and cancer, the number 1 and 2 causes of death in the United States, and 3, since you’ll be heading to the hospital on likely more than one occasion, medical error, the 3rd leading cause of death.  We’re having some fun now!

Guys, have it your way.  I’m all for freedom of choice, especially if a person is informed of the consequences.  If you have three of these symptoms you are playing Russian Roulette, except that instead of the cylinder being loaded to the tune of 1 of 6 it’s more like 3 or 4 of 6.  Good luck with those odds; and put your affairs in order before spinning the wheel.

As with “the Basics” in Part 1 of this series, I’m very pleased with the results regarding blood sugar control.  If you are interested in learning more about the Primal Plunge, I wrote two blog posts on the subject, PRIMAL PLUNGE – TOTAL PRIMAL BLUEPRINT IMMERSION and PRIMAL PLUNGE – PRIMAL LIFESTYLE: WHY?

As mentioned in Part 1 I am running the 21-Day Primal Transformation (PTx) monthly, starting the first Monday of each month; call it your “quick start guide” to all things Primal.

Next up in this series I will be discussing the impact of the Plunge on my thyroid function and hormones. 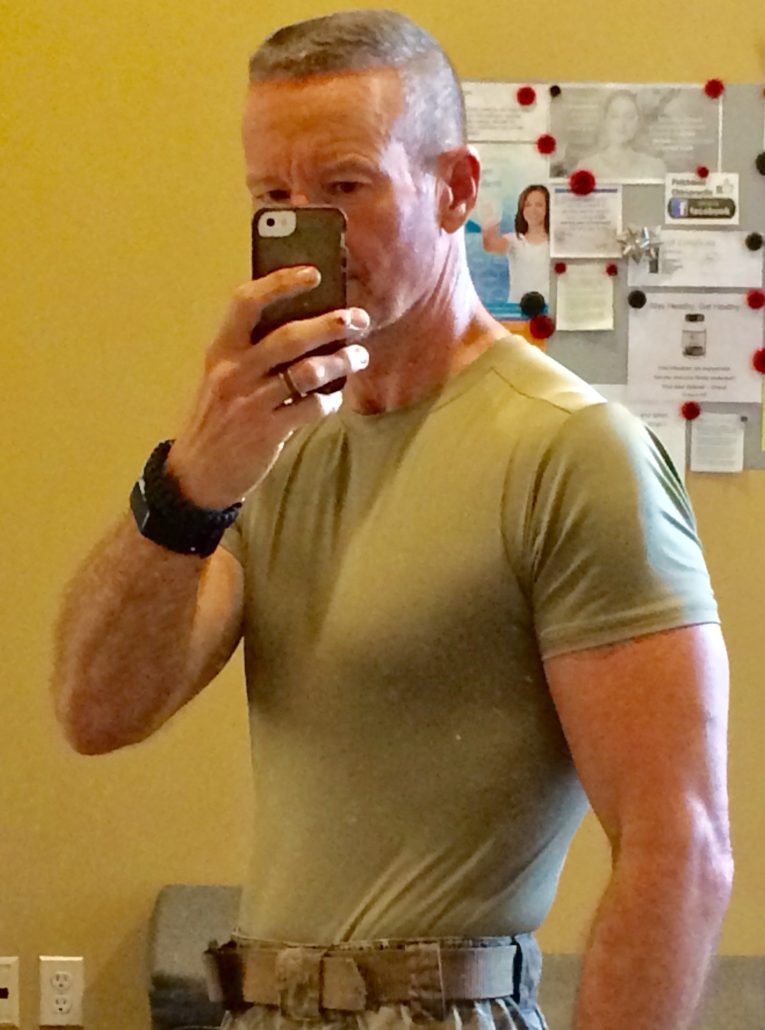