From the “brainwashing” wiki 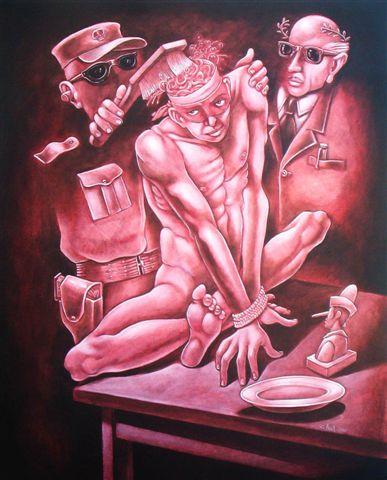 What Have We Done?

In recent years I’ve considered myself to be relatively apolitical. The Republican Party doesn’t represent me, the Democratic Party doesn’t represent me. I have three people in mind, any of them I would seriously consider as President; two have been Republicans (which is not to say they both would be now), and one a Democrat (though perhaps not in the future); all are women. In those same years I’ve been forced to choose the candidates that I think will be least successful in “getting things done,” because getting things done almost invariably amounts to further infringement on the Rights we were guaranteed under the Constitution. Right now we have the worst case scenario in my opinion; one party, it doesn’t much matter which one, in control of both the Executive branch and the Legislative branch of government. Unfortunately they will “get things done,” and most of those things will make the situation worse, not better.

Last time I wrote about the Tech Giants stifling speech, Democracy in Action, and I thought that was bad. Now we have influential people advocating for “deprogramming” of half the population. Will deprogramming be one of the things that gets done?

What Will We Do?

Unfortunately it doesn’t end there.

How are we going to really, almost deprogram these people who have signed up for the cult of Trump?

No seriously…how *do* you deprogram 75 million people? Where do you start? Fox? Facebook?” he wrote in a Tuesday tweet. “We have to start thinking in terms of post-WWII Germany or Japan. Or the failures of Reconstruction in the South.

David Atkins, a member of the California DNC’s convention

But I repeat myself, or are they repeating themselves? As the folks at The Western Journal said, “Once you get into denazification territory, the alarm should have gone off that this was a bad idea.” Do you notice anything peculiar in those quotes? It’s almost as if these people are parroting someone’s talking points; they are using very similar language; deprogram, deprogramming, cult…I find that interesting. Pure coincidence I’m sure.

Unity – Only After Deprogramming

By the way, deprogramming, aka brainwashing, is right out of the Chinese Communist Party’s playbook: “Brainwashing (also known as mind control, menticide, coercive persuasion, thought control, thought reform, and re-education) is the concept that the human mind can be altered or controlled by certain psychological techniques. Brainwashing is said to reduce its subjects’ ability to think critically or independently, to allow the introduction of new, unwanted thoughts and ideas into their minds, as well as to change their attitudes, values and beliefs. The term “brainwashing” was first used in English by Edward Hunter in 1950 to describe how the Chinese government appeared to make people cooperate with them.”

It’s interesting to note that the Tech Giants clearly aren’t very even-handed in their censorship of “extreme” views; if deprogramming 75 million people isn’t extreme I’m not sure what is, even if those deplorable people happen to be White and Republican.

You can’t make this stuff up, even though the likes of Orwell and Huxley have tried.

We can join forces, stop the shouting and lower the temperature. For without unity there is no peace, only bitterness and fury. No progress, only exhausting outrage. No nation, only a state of chaos. This is our historic moment of crisis and challenge, and unity is the path forward.

In the lead-up to the 2020 election, and since, we’ve witnessed something akin to our approach to managing forests by putting out (stifling) all fires, regardless of how small…the result is a huge build-up of combustible materials on the forest floor, leading inevitably to the type of unmanageable fires that California has been fighting a losing battle against in recent years. We are doing the same thing politically…we are stifling half the population, and it seems now we’re expecting them to just get in line for “deprogramming.” It’s not going to happen. “Unity” isn’t going to happen; it didn’t happen between 2017 and 2020, and it’s not going to happen between 2021 and 2024. Frankly, unity is a pipe dream; it’s not a defining feature of late-stage empires. The conversations that should be had will not be had, the solutions that might be found will not be found, and eventually a time will come when fires burn so hot there will be no putting them out.

We used to have a saying at the Naval Academy, of course it was reduced to an acronym, BOHICA; bend over, here it comes again. Make no mistake, these are dangerous times we are living in.

Homesteading Top 10 – Can’t Have Too Many
Scroll to top